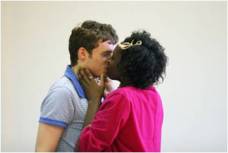 Imagine, if you will, a fifteen year-old bookworm: part person, part-novel, always captivated by great quests, flights of fancy and adventure.

That was me, ten years ago.

My fantasy and sci-fi obsession was religious; The Lord of the Rings, my bible. I made pilgrimage to Platform 9 and ¾, Narnia, Lyra’s Oxford, (Phillip Pullman’s His Dark Materials), and New Crobuzon (China Mieville’s Perdido Street Station). This passion is certainly why I decided to become an author.

But there was one problem. None of my favourite characters looked like me. And so began my great search. In the end I found only one: Noughts and Crosses by Malorie Blackman. I started to wonder: if fantasy is so freeing, then why aren’t there more writers writing, like Rick Riordan with his Kane Chronicles, more ethnically diverse protagonists? Perhaps the issue does not lie with the writers at all, or even the publishers.

Maybe the problem lies with the readers.

But my readers are often very surprised to find the main character of my novel Sacerdos is a black girl. Despite the continual references: “she was a brown skinned girl of about three, darker than her brother” (Chapter 2); “her father, Celassis had dark umber skin and strong brown eyes” (Chapter 3); and “her dark skin was darker still under her almond eyes” (Chapter 4), and so on and so forth.

Perhaps it’s not these readers’ faults. Cultural whitewashing has made white the norm and everything else strange or at least, a bold cultural statement.

We can’t deny that racism is evident in science-fiction and fantasy. From the dark-skinned warrior races: the Orcs, the Klingons, to the goblins who always feature as antagonists (“baddies”).

But let’s take a look at The Hunger Games, published in 2008 and released as a film in 2012. Twitter was very quickly all a-flame with the many racist fans who were dismayed by the casting of non-white actors. One fan said “why does rue have to be black not gonna lie kinda ruined the movie,” while another said “why did the producers make all the good characters black?”

There are many other quotes here, if you care to see the level of racism exhibited by people who were very much like me – bookworms, who took The Hunger Games as their imaginative escape, didn’t read it properly, and found their novel “ruined” by the death of a little girl who was the wrong colour.

Maybe this is endemic of a wider problem with society as a whole, shared by adults all over the Western world. But aren’t young adults supposed to be the “new” generation, more liberal and open minded? On the other hand, isn’t Twitter just a place to “say-it-like-it-is?” Are these kids not just exercising their right, the right of all readers to decide that white is right and any other race is wrong?

Perhaps. It is ironic that in a genre without boundaries, as uncontainable as dreams and immeasurable as a horizon, the prison bars of archaic prejudice persist. So how do we change things? Well, it starts with you and I: the readers, the bookworms. If we start to buy into fantasy with all ethnicities as protagonists, then perhaps, in a few years, white won’t be the only version of right.

Elizabeth Amisu is the author of The Sacerdos Mysteries, available now from Amazon UK. She blogs regularly at www.elizawriter.tumblr.com.

6 thoughts on “Racism in Fantasy: Are Young Adults Above It?”