I figured it would make sense to devote my first entry to this topic.  My website was banned in Turkey even before it went live due to the government’s blocking of GoDaddy’s forwarding IP, which is shared by millions of websites simultaneously.  Only after acquiring a new nameserver has my site become available in my home country, and yet its twin domain igalaciman.info (note: defunct on 8/5/13) remains blocked. The IP is blocked, as in most cases in Turkey, arbitrarily and without an explanation.  It is usual for the Turkish state to block access to various websites, especially ones that contain political content.  This issue became a cause célèbre in recent years after the blocking of popular sites such as YouTube and MySpace, or even Google Maps at one point.  However, state censorship in Turkey goes beyond such well-known sites and attack many others that feature user-generated content or discuss history, arts, sexuality, and -recently- even gender equality.

Freedom of expression and freedom of access to information are inalienable rights that cannot be taken away by any government for any political reason.  I ask everyone to join me in condemning all governments that impose restrictions on information exchange between private citizens.  Here, you can follow the latest reports on Internet Freedom compiled by Reporters Without Borders.  The 2012 Enemies of the Internet list includes the 12 worst offenders, while the “Under Surveillance” lists the 14 countries (including Turkey) with a deteriorating record.

Remember: You can always utilize proxy servers to exert your right to access lawful information on the Internet.  Websites that list several proxy sites in one place are especially useful, in case some of the proxies are also censored by your government. 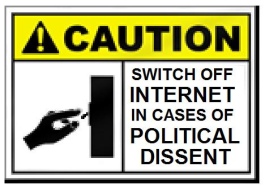 One thought on “On Internet Censorship”